Ask Ben Wiemeyer what he does and you’ll get a seemingly vague response:
“I just work hard and make artwork.” he smiles, it’s clearly the short answer.

Artwork and hard work are two things Wiemeyer is definitely no stranger to. Until very recently he was technical director for the Leonardo Art Museum by day he’s rubbing elbows with the high-brow elite of the Salt Lake City fine art community while facilitating the installation of world class exhibitions, and working for and with various non-profit art groups around the city. He’s also the former art chair for the Young Architects forum for the American Institute of Architects, assisted in organizing Sustain the Grainary, Fluid Adagio installation design competition, and most recently the SixtyNine Seventy project/ competition: a collaboration between the Salt Lake City Downtown Alliance and the Young Architects forum to bring revitalization to downtown; a competition that drew over 200 entries from 48 different countries. 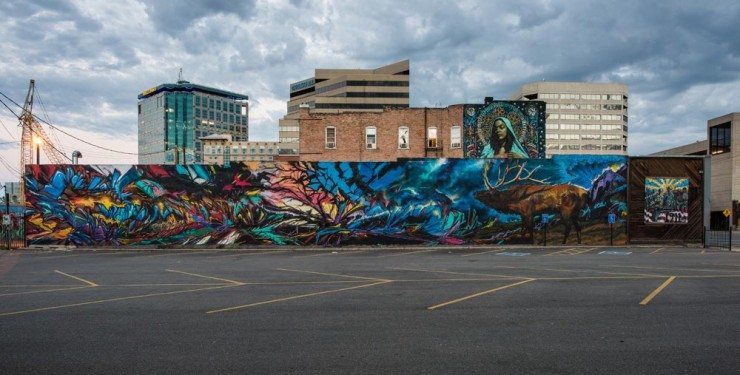 However, Wiemeyer isn’t your typical art snob. He graduated from the University of Utah with a Fine Art degree in sculpture, but he’s also been painting graffiti on the streets of salt lake, for the last seventeen years. Maintaining not just good standing, but respect and admiration in both circles.

It’s clear Wiemeyer’s unique position as liaison between the underground and the commercial art realms comes from an incredibly diverse background. “I think any experience you have in any realm fuels the other one, in any way. I prefer diversity. I think it’s very necessary. I want a multi- disciplinary roundtable, I don’t want to quantify or pin myself as this individual. ‘I’m a painter.’ ‘What kind of painter’ ‘I paint oil paints’ ‘oh that’s so fucking boring.’ I work in all mediums, I may not be the best in all mediums, but I feel like I’m expressing myself and I feel like it’s good enough right now.” 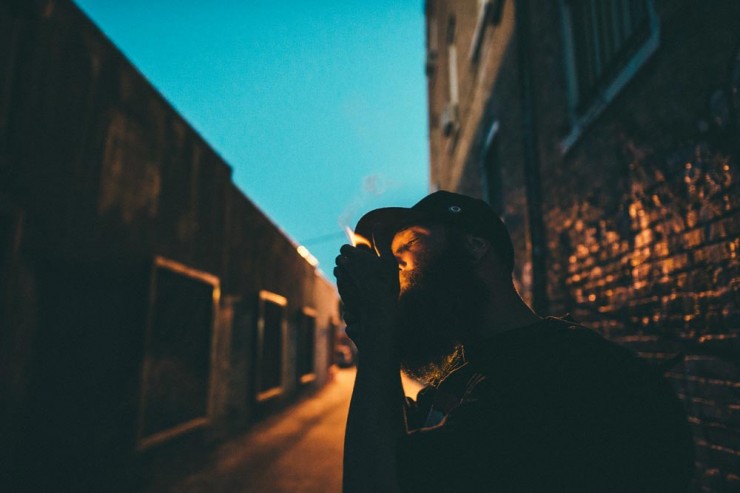 Wiemeyer’s work can be seen frequently at Captain Captain studio, Salt Lake Running Company’s mural, Broadway, Exchange place, and more. His most recent, most obvious contribution to the community is a very visible installation on 200 S and 200 E. “Tim [one of the owners of Gallenson’s] had been after me to paint that wall for a long time, maybe ten years. And that mural had been around for a long, long time. It was really faded, and it was an old typewriter store before it was a gun store, and it was this ribbon that walked across the wall and I sort of dug it. Why paint over existing murals, you know? There’s so much stuff out there that hasn’t been affected yet. Graffiti is very rude and narcissistic subculture, we vandalize and capitalize on these spaces that aren’t ours, and when it comes to murals I don’t feel like that’s something you should go over. Then it got dissed, vandalized and looked like shit and I was like ‘well, all right. We can do something now.

His incredible passion for his art is contagious, arresting…
and definitely unapologetic.

“I’ve always loved that idea of intervention; You have no choice but to see this because it’s in your space; it’s in the public sphere, it’s not in a gallery, it’s not something you have to approach, or walk in with some mindset of some particular context or whatever. It’s just in this here for you; it’s here for everybody. There’s something about that scale to me too, it has a bigger effect; it’s more powerful, more visceral to me.”

Ben doesn’t seem to ever be intimidated by the size of projects. He cites his favorite medium as instillation art. “I think there was some stuff I was working on for my undergrad that was pretty substantial. Sculptures… machines that create residue. I think the best piece I’ve ever done was a self-portrait that I did at the Salt Lake Arts Center, which is now the UMOCA, which was a 10 ft by 20 ft self portrait of my face that had a machine that slowly destroyed it over the duration of the 3 month show and it sliced the painting into 44 2 1⁄2 in strips over 3 months and it was kind of a self destructive self portrait in some ways. I felt like that was really strong. I felt like I had kind of bridged both gaps. It was a really strong painting and a really strong sculpture, and it felt like they met right in the middle.”

He goes on; “I dig the whole ephemeral nature of art, you kind of get used to that from painting graffiti, I wanted to challenge the preciousness of artwork with that piece.

I wanted to paint the biggest painting they’ve ever had that’s not worth destroying and destroy it during the show cause I feel like galleries a lot of the time rob the soul, they want to put everything behind glass, quantify or put some sort of value to it, which is obscene. You approach galleries in a manner that’s like ‘alright, I’m gonna go look at some artwork’ and you go in there and it’s intimate, you’re allowed to approach this artwork and have some conversation with it or whatever the fuck you’re doing and move to the next one, and I wanted to make artwork that confronted you when you walked into the space- kind of like intervention. It moves you in some ways, and the fact that it’s being destroyed, just challenges the preciousness of those things.”

Growing up in Davis County, Casey first realized his love of art while attending an art class at… Read more