Within the last few years, Casey’s Kawaguchi’s life as an artist seems to have catapulted in the direction that most artists (or people) can only dream of — making a living creating rad shit. No, he isn’t traveling around the country trying to pawn off his work to a bunch of half drunken yuppies at local art festivals. He has been busy collaborating with the likes of 4frnt skis, Skullcandy headphones and various clothing companies; as well as catching the eye of SABER (world renown street/ graffiti artist) and Juxtapoz magazine. 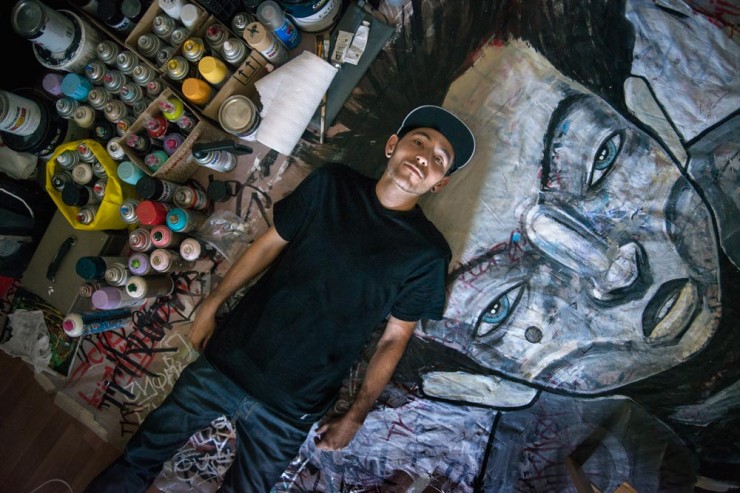 Growing up in Davis County, Casey first realized his love of art while attending an art class at Clearfield High. In the beginning, he tried his hand at painting but felt like he was too slow and it took too long to create what he wanted, so he turned to drawing. A few years later while still honing his craft in illustration, he was starting to realize how much he enjoyed the art of graffiti. So naturally, he decided to pick up a couple of spray cans and give it a shot. “As soon as I started, I was like ‘OH SHIT! What have I been doing this whole time?!’ I was so stoked on it, and still am!” he told me with a grin. And by the looks of his bedroom/studio in which we were
chatting, I could tell. The first thing I noticed when he invited me to sit down in his space, was a giant character portrait of a woman that he had just finished painting on the floor the night before. He had painted it on a giant plastic sheet, roughly 4’ x 5’. I asked him “Why did you decide to paint on plastic?” and he responded “I wanted to see how well I could control the paint while I was working.” After I looked at in awe for a few seconds, it seemed to me like he had no trouble. “I am probably going to leave it on my floor for a couple of days, so when I walk on it, it will start to look old and worn” he said. I thought the piece looked amazing as is, but I liked the fact he still wanted to “work” on it every time he had to walk across the room. The next thing I noticed were all of the spray cans that he had piled in the corners of his “A” framed room, which happened to be the attic of his house. If I were to guess, I would have to say that there were anywhere from 25-30 cans of spray paint just waiting to be used. “I normally have a fire extinguisher in here while I work, because if there was ever a fire, it wouldn’t be good” he said laughing. “This place would be an instant fireball!” I hadn’t really thought about that, but after he pointed it out, I could see why it would be a concern. It seemed like he barely had any room to live, but it didn’t feel uncomfortable. It had a warm, creative energy about it. 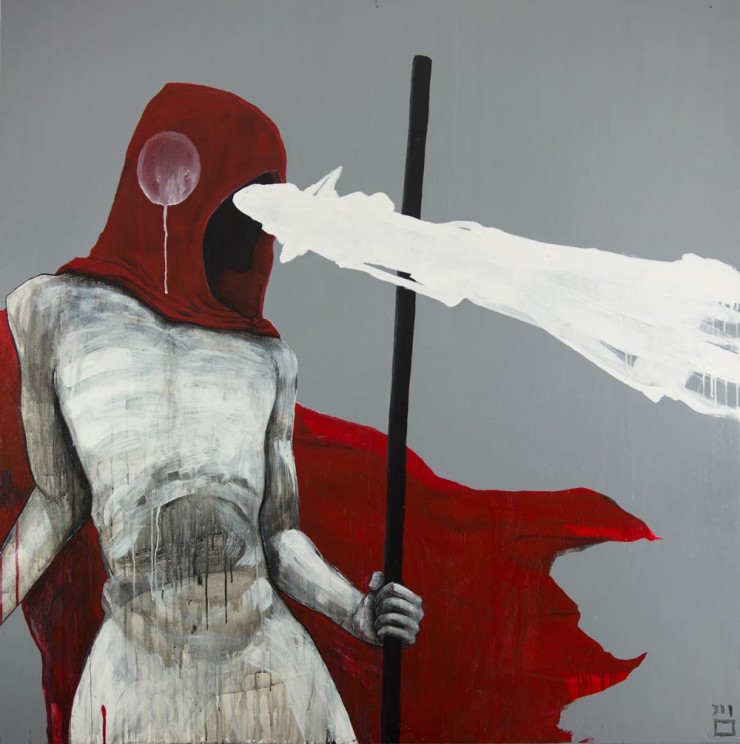 While we sat there and shot the shit for a while, I started paying closer attention to the other paintings he had stacked and scattered throughout the room. It was becoming apparent to me that Casey enjoys painting character portraits of Asian men and women. “I love drawing or painting something that you can connect with. Like a face, when you look at it, you feel like you are connecting with it in some way” he told me. I noticed that some are more abstract and obscure than others, but one of the things that stayed consistent throughout all of his pieces, were the eyes of his subjects. They were strikingly realistic. “I will spend most of my time on the eyes. I try to make them the focal point of all my pieces”, he told me. “Even if the rest of the piece is messy, I will definitely focus on making the eyes stand out”. I was also curious to find out why most of his subjects looked Asian? “I think that full on Japanese people, especially the men, look really cool. I think they have really cool facial features. I try to figure out what features I like and then incorporate them into my work” he exclaimed. “My dad is Japanese and my mom is a mix of different cultures, but I definitely think my Japanese ancestry and influence shows through in my work”, he said. “I really like the patterning and the brush work that is used. I try to use some of those same techniques in my work, while still making them fit my style.” While he was telling me this, I started seeing all of his paintings in a whole new perspective. I was noticing all of the details that he was describing and I was starting to appreciate his work more and more. 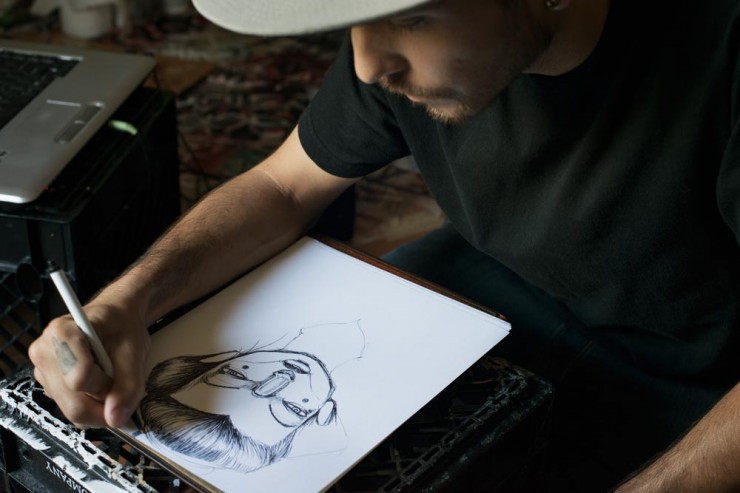 Despite the fact Casey mainly paints portraits, I found it ironic that one of the paintings that has garnered him the most attention recently, is a piece that he calls “Laser Face”. The funny thing is, you can’t even see the subjects face. There is just something about it that is captivating, and apparently I am not the only one who feels this way. SABER has tipped his hat in Casey’s direction as well. Recently, SABER and Juxtapoz magazine held a contest together, which allowed anyone who had never been featured in the magazine before, to submit their artwork via twitter to SABER; who in turn would choose his favorite artists. Once chosen, the winning artist would be featured in Juxtapoz, and the runners up would be featured on SABER’s blog. For any contemporary urban artist, this was a huge deal. Luckily for Casey, he happened to notice on his twitter feed that SABER was taking submissions for the competition, but he had to hurry because the contest was about to end. He quickly submitted one of his pieces just to see what would happen, and sure enough SABER got back to him. He wanted to see more of Casey’s work, so he submitted a copy of “Laser Face” and waited to hear back. After about 2-3 weeks SABER finally posted his top 22 artists on the Juxtapoz website and Casey landed in at number ten. “It got me stoked on the fact that big things can happen that you don’t even plan for” he said with a smile.

Sometimes I get down because i have to work a Shitty job that i hate, and i can’t quite Support mySelf with my art yet. but once thiS happened, it made me realize that i need to keep at it. big thingS can happen if you just try.

And it’s true. It seems to be working out really well for him. Shit, he made it in our magazine!

Make sure to check out Casey’s stuff at caseykawaguchi.com.