I sat hunched over on a couch, staring at a drawing of a pair of cranes pinned against the wall. Only five minutes before, a stuffed black bear my exact height bored holes into my face while I shuffled around the landing of Guthrie Studios, wondering what the hell kind of world I just walked into. After about twenty minutes of anxiously wandering the corridors, the man I was waiting for appeared and firmly shook my hand.

“I was born in the bohemia. I’ve done art since I was a baby. My father’s an artist, my stepfather’s an artist. I’ve always been around that environment,” began Christian Michael. He was now lying next to me on his couch, scrutinizing the ceiling. Each of his words were carefully drawn and measured. “I live the gypsy lifestyle, and I work a lot. I paint every day. This is what I do.” 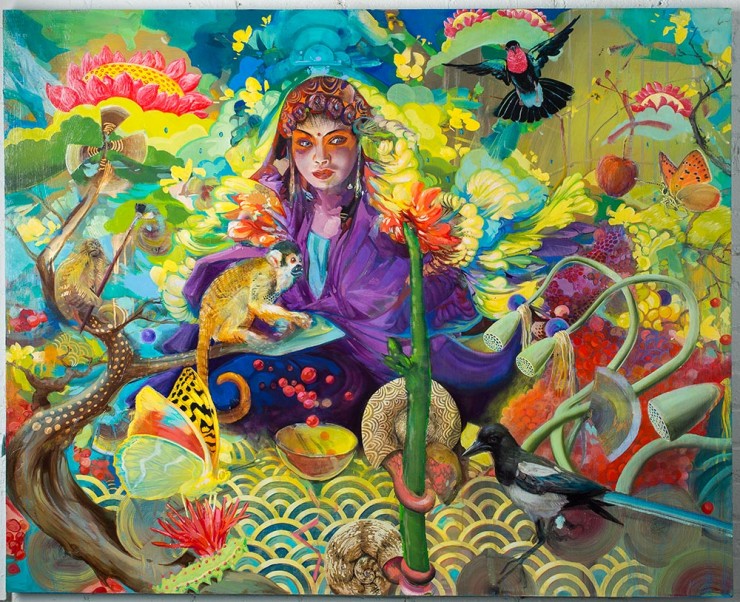 Okay, so we established that he paints, but for those of you unfamiliar with Christian Michael, let me get you up to speed. Christian is a newcomer to Salt Lake City that works out of the 36-year-old art collective on 2nd and 2nd, Guthrie Studios. He is one of the driving forces behind the prominent collaborative painting movement called The Oyster Pirates, a group started by other noted artists Sri Whipple, Jason Wheatley (or Ti Kunkit, as he occasionally likes to be called) and Michael Page. The Oyster Pirates exhibit their work in Salt Lake City, San Francisco, and Berlin, and soon will be holding more shows in Europe and Asia. Christian had things to say about his work, The Oyster Pirates, and the local art community, so we knocked off the vague interview bullshittery and got right to it.

“My work is the everyday objects in nature that I see and reinterpret through heavy patterns, bright colors, lines and vibrations. I don’t just paint; I do pen and ink, and experiment with prints as well. Here’s something that’s finished,” he said, while laying out six large white sheets of custom handmade paper filled with a continuous, extraordinarily detailed pen and ink drawing of fossilized coral along the bottom. Most of his pieces I saw were exaggerations of the inherent beauty of subjects like flowers, honeycombs, birds and sea life. To me, they created an ethereal world that instantly quieted the prattle of everyday life and awakened the wonders of the natural universe. “You can obviously see a lot of East meets West influence. My paintings have a worldly sensibility to them–they hum.”

Christian moved on from his own work, and on to The Oyster Pirates: “We’re excited about what it is,” he started.

“I love to put down something, and not even know what it is, and see one of those guys transform it into something. Oyster Pirates is a free-jazz art collective. Everybody’s reacting to what the last person did. The painting is touched, and it’s passed on, and so forth. It’s a call and response. It’s music in a painting format. Oyster Pirates is free-jazz. The people that paint for Oyster Pirates are crazy talented and passionate in what they do. Everyone that’s been in Oyster Pirates is real.”

He showed me several paintings leaning against the corridor, noting how Jason painted over parts of his original design with spider monkeys and trees in one piece, and how Sri added bold, vibrant brushstrokes along the shell of Christian’s snail in another. All paintings started out with one artist, and ended with three or more. “We touch each other’s work,” he explained. “We have no ego in Oyster Pirates.” (And here I was, being an asshole by thinking all pirates had egos. Lesson learned; free-jazz hand slap to the mouth.)

“I just want to say there are some incredible artists working out of Salt Lake. There are many unsung heroes of art in Salt Lake, and they deserve people’s support. Don’t think because somebody’s an artist here in town that they’re any less than artists in other cities. This is the real bohemia. There are twenty-something artists here [in Guthrie Studios], and quite a few of them are highly collected. Don’t underestimate their talents, you know?”

I asked him why he chose to stay in Salt Lake, and he answered,

“If you’re an artist, this is one of the most awesome places to be. You can get a ton of work done. As an outsider who made his way in, I can see there is about to be some really special stuff happening here soon. Right now, and in the future, Salt Lake is starting to get attention from outside eyes.”

Outside eyes are a good thing when you consider how difficult finding an audience as an artist can really be. Christian has managed to do that, and we’re all better off for it. Put down your phone and check out Christian Michael’s art every third Friday during the Gallery Stroll at Guthrie Studios–while he’s still around. This man’s already been places, but I can guarantee he’s going plenty more.