It’s what she knows — it’s what she does. Jann Haworth’s list of accomplishments is impressive and at the moment, she doesn’t show signs of slowing down. This is a good thing. Good for the international pop art scene, and even better for our local Salt Lake City art scene. I had the privilege of catching up with Jann at the Leonardo, where she runs the museum’s art lab, to talk about her work — past and present, as well as her outlook on the Salt Lake art community.

Jann is a native of Hollywood, California and is in many ways a product of the environment there. Her father was a production designer in the film industry and would frequently take her along on sets. Growing up in this kind of atmosphere has proven to be a source of inspiration for Jann’s work. After a year of studying philosophy at UCLA, she changed her major to pursue what was in her blood — art. She upped her commitment to make it her craft with a move abroad to London, to study at the Slade School of Fine Art.

While studying at the Slade, she began to develop her craft as a pop artist, specifically with soft sculpture, making a sculpture out of canvas or cloth. The idea was different. Jann had worked herself to the forefront of some- thing new. 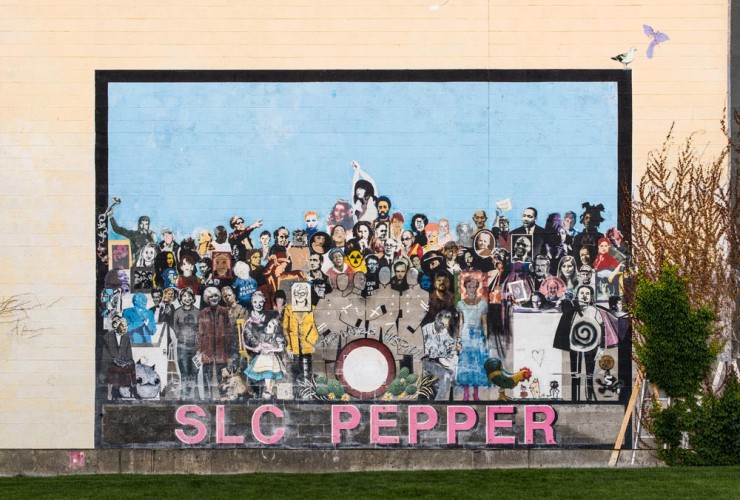 If you don’t know the name Jann Haworth, search her name online. You’ll quickly learn that she co-created the album cover art for one of the most well-known and influential rock albums — the Beatles’ Sgt. Pepper’s Lonely Hearts Club Band. Jann and her partner on the project, Peter Blake, became friends with the Beatles before the band made it big. When the Beatles weren’t satisfied with the cover for their new album, they enlisted Jann and Peter to redesign it.

The overarching concept for the album was to have the Beatles pose as the Sgt. Pep- per Band. Jann and Peter suggested that the crowd, gathered around the Beatles on the cover, be made up of people that the band admired. Taking inspiration from film, Jann built a life-size set masking two-dimensional cutouts with the three-dimensional Beatles standing in the foreground. The band provided about a third of the people for the crowd, so Jann and Peter supplied the rest. “The crowd is a real amalgam of funny things. Everything from Edgar Allen Poe, to Carl Jung, to Huntz Hall… just mad stupid contrasts. All George could give us was a bunch of gurus,” she laughed.

I’d spent two hours on a Monday evening in the art lab, trying to wrap my mind around all that she’s accomplished in her life up to this point. At the close of our interview she invited me out to her home in Sundance. Jann lives full-time in Salt Lake, but in preparation for a new exhibit featuring some of her work at BYU’s Museum of Art, she planned to spend a few days at her home in Sundance. 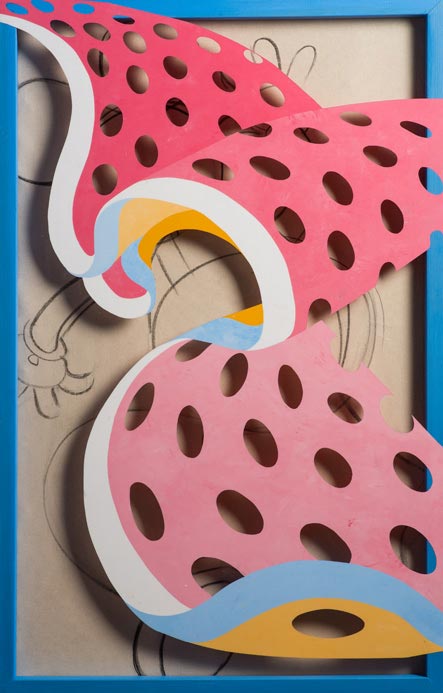 I arrived at 7pm on a Thursday evening, the sun dropping behind the mountains, but still managing to keep a corner pocket known as Sundance lit. As you walk from the drive- way to the stone and wood structure, long planks of wood lead you to the entrance of the home. Walking along the deck, you get a feel- ing of being suspended amongst the trees. You can tell instantly that the deck has served the home well. It’s entertained all that have come and spent long evenings and early mornings in conversation and contemplation. The home is amazing. It’s the kind of place where you could lose yourself in your work for weeks at a time and not even care about the outside world. The kind of place that inspires you to write, carve, sculpt, paint, and sew.

As Jann welcomed me into her home, I felt as if I were walking straight into a part of her life — a part that she holds near to her heart. It’s where both her father and her husband spent their final days before they passed. I respectfully walked into the home, my eyes following its architectural design. Large, raw wood logs run across the ceiling. Paintings, pictures, and sculptures fill the space. Each tells a story of Jann’s craft.

She led me to the kitchen and introduced me to her daughter, Daisy. Daisy was born and raised in England while her mother spent 35 years working as an artist, illustrator, educator, and a mother. Jann’s created and taken opportunities like the Looking Glass School in England, which she founded and ran for seven years. These experiences could be seen as tangents to the work of an artist, but to Jann these bifurcations haven’t been. She explained, “None of them have been the enemy of the work. All of them have taught me things and have enhanced the work.”

Jann relocated to Utah in 1997 and lived in Sundance. She continued to work and contribute to her new local art community with the start of Sundance’s Art Shack. She later co-founded the Sundance Mountain Charter School (now Soldier Hollow Charter School). In 2004 she brought her talents to Salt Lake with an outdoor mural, called SLC Pepper. It’s an update of the cover that she designed for the Beatles. Jann explained, “The cover was flawed. We wanted to make SLC Pepper more gender and ethnically diverse with people of stature that were catalysts for change, either in the arts or socially.” 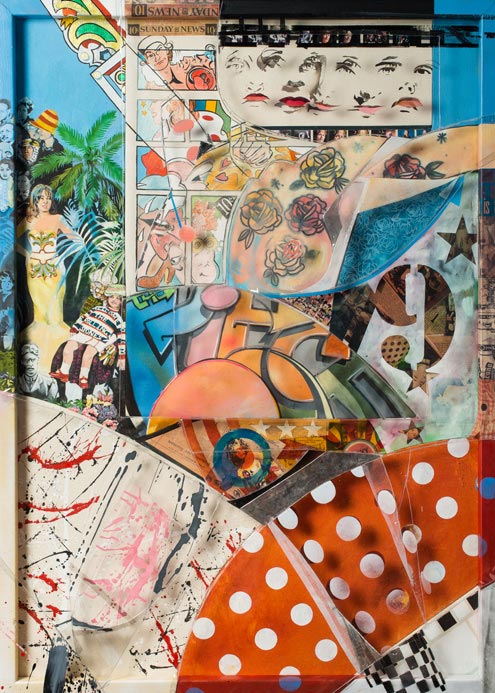 Art has a way of bringing the commu- nity together. Adam Price’s 337 Project, of which Jann and 150 other local artists collabo- rated, brought Salt Lake together in a way the city hadn’t yet experienced. Jann said, “The 337 Project was such a rich experience. I think it helped Salt Lake to define its own vision. There was a shimmer that everybody felt, that meant that some conscious level was raised.”

I asked her if she considers Salt Lake to be home. Without hesitation she said yes, it’s something she’s proud of. “Anything is pos- sible here. You can think big, you can think small, you can make something fantastic,” she said. “Salt Lake feels very vibrant; peo- ple are very supportive of each other.”

Jann’s latest contribution to the local art community is called “Work To Do”. She and three other female artists collaborated on the topic of women, and the complex issues that surround their role and work. I attended the opening night of the exhibit where a large crowd filled the museum to consume the art.

As I watched Jann interact with those eager to talk about her work, art in gen- eral, or whatever else was on their mind. I saw firsthand what she values. Jann Haworth is all about connecting and building the com- munity through her craft. As much as she’s part of the international art community — she’s part of our local art community. And this is a good thing.

Growing up in Davis County, Casey first realized his love of art while attending an art class at… Read more