It’s not uncommon for our reputations to be based on our strengths. Artistically inclined individuals create a name for themselves by putting brush to canvas, because that’s what they do best. An all-American wrestler earns his title by pinning nearly every opponent to the mat. In the same way, Epic Brewing has garnered a reputation based on not only the quality, but also the strength of its beer.

The beautiful brainchild of business partners David Cole and Peter Erickson, Epic Brewing is the fulfillment of a dream these two have had for almost thirty years. In the early 1980s, the pair attended two well- respected southern California colleges, and both received degrees in Microbiology. Shortly after graduation, David relocated to San Francisco to work for an aquaculture company, and Peter followed shortly after. While in the Bay Area, the two friends developed an affinity for craft beer, and when the company they were working for was sold off, they decided to go into business for themselves. While they had the desire to start a brewery at that point, it would be some time before they’d have the money to get their own business started. 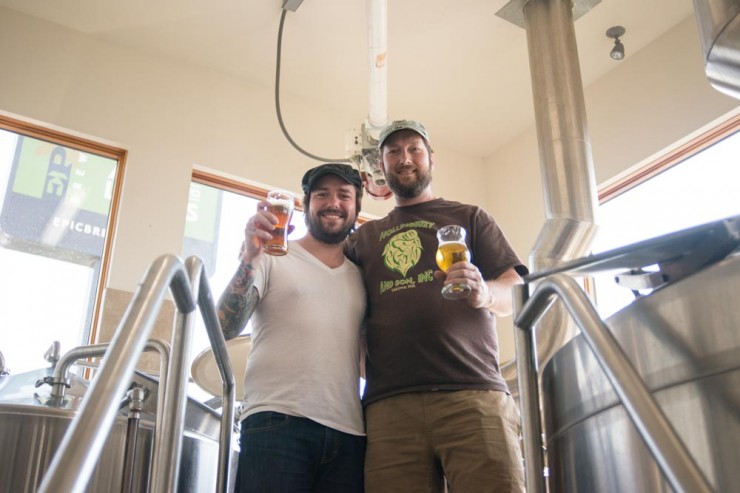 In 1992, the duo moved to Utah and started an aquaculture company, which over the next decade grew to the point of international recognition. Over time, however, David and Peter grew bored with the company, and began contemplating where their entrepreneurial spirits would take them next.

While figuring out what their future would hold, the two went their separate ways for a very brief period of time. Then, in 2008, Utah began a drastic (relatively speaking) overhaul of its liquor laws. The changes in the laws gave breweries the ability to begin selling “highpoint beer” (beer greater than 3.2% Alcohol by Volume, or ABV) directly to the public. David and Peter saw this as the perfect opportunity to make their life-long dream a reality. Believing there to be not only a market, but also an earnest desire for quality full-strength craft beer, David and Peter started Epic Brewing. They had no idea just how earnest the public’s desire actually was.

In only two years of doing business, Epic has become the third largest brewery in Utah. Beer is measured in “barrels,” one barrel being equal to thirty-one gallons of beer. In the beginning, David and Peter’s goal was to be producing 800 barrels or 24,800 gallons of beer a year, within five years. However, between March and December of 2010, the brewery’s inaugural year, Epic produced 1200 barrels. Then, in 2011 they were able to raise that number to 4500 barrels. Currently, Epic is on track to brew approximately 9000 barrels of beer in 2012. That’s over a quarter of a million gallons, which comes out to about 2,232,000 pints of beer, this year alone!

Currently, the Epic Brewing facility is approximately 5000 square feet, which includes its storefront, office space, and bathrooms. This may limit the amount and variety of beer they’re able to produce, but the brewery is in the final stages of planning for an expansion that could add an estimated 4000 square feet of warehouse space. The benefit to beer drinkers is that Epic will be able to produce between 14000 and 16000 barrels of beer each year. Furthermore, beers produced in limited quantity due to the complex aging process will be more readily available because of this increase in storage space.

Much of the credit for Epic’s high quality highpoint beer belongs to Brew Master Kevin Crompton. David Cole says, “Kevin’s goal has always been to make sure the alcohol in our big beers is well hidden.” David continued, a lot of breweries will openly tell you they use corn syrup to increase the alcohol content because it’s cheap and ferments quickly. We use only high quality malts aged anywhere from two weeks to nine months to create the higher alcohol content in our beers. When you use good malt as your source, you get a greater ratio of taste, or flavor, to alcohol. Quality ingredients and patience allows us to make good tasting beers with a lot of alcohol hidden in the flavor.

If you’d like to check out the fermented fruit of David and Peter’s labor of love, you can stop by epicbrewing.com or their store at 825 S State St in downtown Salt Lake City.

Through the Smoke and Ash

I’d only known him for about thirty minutes, but already Bob made me feel like I was an… Read more