The Non-Foodie’s Guide To Taco Carts

Just about every meal I make at home includes beans, hot chilies of some ilk, onions, garlic, tortillas and lime. I never make dessert, since I’m pretty sure my tongue would detach itself and run away if I were to try to mix any one of those ingredients into a berry medley. My life is one big taco cart. So when my editor was like, “Wanna write about taco carts?” I grabbed him by the collar and hissed, “If you’re joking, I’ll cut your dick off.” He backed away slowly for a few paces, then turned and took off running. We haven’t spoken since, but I’m pretty sure the assignment’s still mine, so here we go. 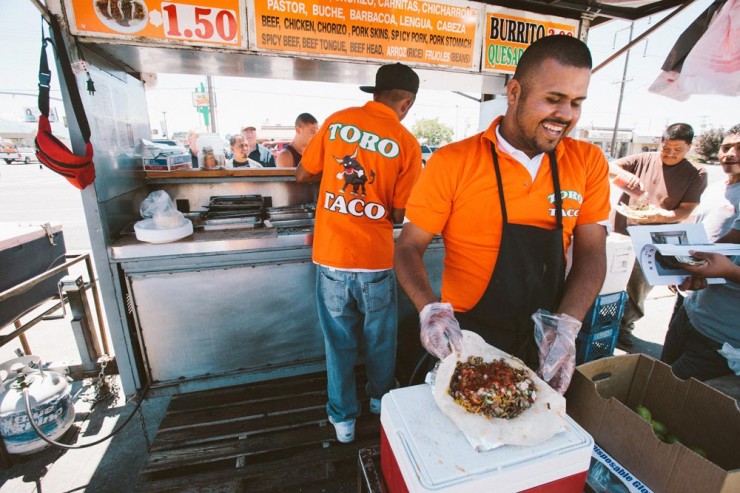 My goal was this: spend less money on four different taco carts than I would at any sit-down restaurant in the city. I brought along local stand-up comic Levi Rounds, who had lived in L.A. for five months where he basically lived off of taco cart food, so I knew his opinion would provide some culinary merit. Plus, we were having sex at the time, so I imagined the night would go like this: we would FEAST on the cheap and groan with satisfied delight, as we made sweet love on a pile of unused cash, while our stomachs gurgled and churned with carne asada. Now that you can’t get that horrifying image out of your head, let’s get to the food adventure!

I started out sober and early in the day at Tacos Hidalgo on 400 W South Temple. Everyone on Yelp bellowed “You simply must try their tacos el pastor!” and since Yelp reviews are never wrong, I said, “Okay!” and skipped off to Hidalgo. The pastor was excel- lent. Levi started smart and simple with the carne asada. As we ate, we locked arms and danced around in merriment, congratulat- ing ourselves for our well-picked lunch. Levi ordered a shredded pork taco before we left, of which I bit off a succulent mouthful, and life was good.

We were right next to the Gateway Mall and had time to kill, so we decided to catch a movie and then bar-hop as we made our way toward State Street. Several very boozy hours later, we arrived at Paisa Mariscos y Tacos on 894 South State Street. Levi wasted no time ordering fish tacos, but I held back on that. I’m sorry guys, but I don’t trust many coolers filled with fish in Utah. I just don’t. If I were on a beach, and the vendor just pointed out to the sea when I asked where her catch came from, then I’d order the whole cart and devour ev- erything short of the cook’s spatula. However, as it was, I was standing across the street from a Chevron… in the mountains… surrounded by desert. So I stuck my tail between my legs and ordered the pollo. It was great, don’t get me wrong, but I knew deep down inside that I was failing my mission to try something new. 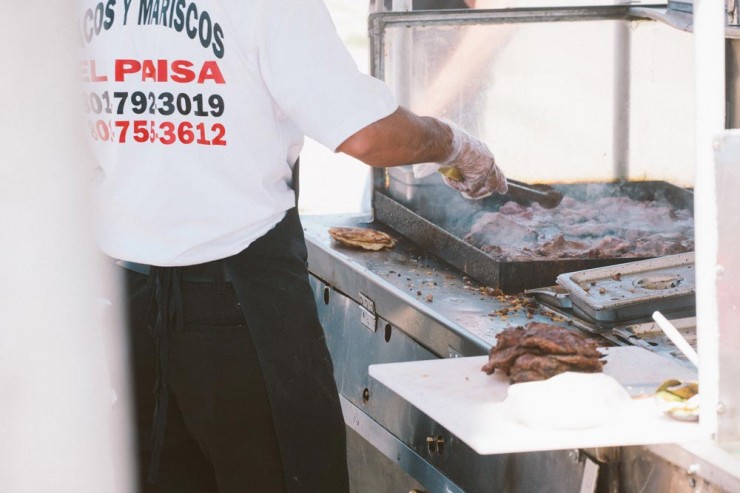 When we got to the 800 South side of the Sears parking lot on State Street, I studied the Tacos El Toro warily. I really just felt like having some fried jalapenos and onions, and calling it a night. There never was any chance of me ever turning into a foodie that would say (in all seriousness), “Wow, that blood sausage really went well with the gummy egg!” So when I saw Levi order beef tongue, my jaw dropped in horror. I stared at him chewing as I recoiled at the thought of what unholy odor would be seep- ing out of his bathroom door later, to which he noticed and said, “Fuck off, Ashlee.” He bit into his taco a couple more times, sauce dripping down his mouth, and threw his wrapper in the trash bin. I stared at the foil and began to sweat. My buzz had already faded away, and I felt sick for what I was about to do, but I stepped up to the cart and quietly uttered, “Lengua.” Cow tongue. I ate the tongue, I ate the tongue, guys! It was… chewy… but also tasted satisfyingly like brisket. Many times I had to close my eyes and try to forget what I was eating, but for the most part, there was no need for that. If someone hadn’t told me I was eating tongue, I probably wouldn’t have given a shit.

At long last, we scooted over to the State Street side of Sears, and arrived at the mother of all taco carts in Utah. To be perfectly honest, everything else was just a precursor to bowing down before the Tacos Don Rafa condiment cooler. My absolute favorite activity to do on the planet is slathering hot sauces, pickled onions, cabbage, pico de gallo and guacamole all over a carne asada burrito before eating it with a frenzied, dark gleam in my eyes. Poor Levi, resigned to never having a normal dining experience when he’s with me, accidentally got too close to the green salsa I was shoveling into a bag. I clawed at his wrist violently, warning his ass that I wasn’t EVEN CLOSE to finishing snatching up all the good shit, and all he did was roll his eyes up to the heavens; whimpering to himself about a better tomorrow.

After the adventure was over, I went home, cracked open a large beer and thought to myself how really lovely it is to reject the dumb gypsy brandy mussel jubilee (with toast points!) restaurants try to push on you; and opt for solid, delicious, cheap eats within a working class atmosphere. Playing the game of who knows more Spanish/who knows more English, and the crowds of people standing around and eat- ing, just adds to the overwhelming feeling of how much food brings us all together.

Get your taco fix at these local favorites:

Going on its 35th anniversary as a family owned business, Joey Cannella has been proudly running their family’s… Read more