Design of the Times: A Space Built For Life

Story by Amy Tibbals and Cody Derrick of CITYHOMECOLLECTIVE

On a typical July Sunday, in the dry heat of Salt Lake, I steered down a gravel lane that led to an unassuming home with a flat roof, lovely and light facade, and modest ability to blend into its own beautiful surroundings. My expectations were meager. I’d been invited to a pool party. I anticipated a pool and little else. Maybe a drink.

The home – and site of said pool party – was built in 1958, and not a damn thing’s been done since. There are no major renovations to speak of, and it stands as minimally and beautifully as it did upon completion. It’s likely one of the most intact and original examples of architect Steve McDonald’s work as you’ll find today. The owner that resides here today is the same that purchased it upon its completion, which speaks volumes to the original design and intent of the home. She has no intention of making changes or selling; this incredible space has perfectly suited her life’s needs. 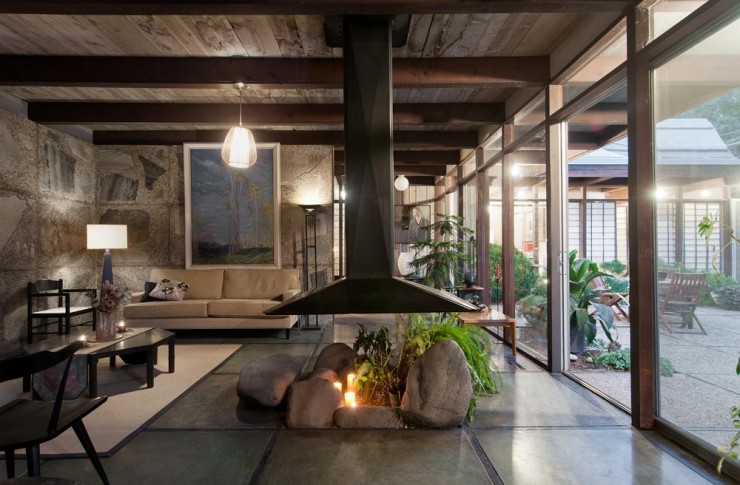 The structure itself is essentially a well- designed invitation. Those who lived here had a sense that they were growing up indoors and outdoors at the same time. -Each bedroom in the home has its own floor-to-ceiling glass door to the exterior. Summers were packed with pool parties, and toasty winters were experienced through the massive windows that flank both sides of the home. From nearly any spot on the property, you’re connected and invited to another. The position of the home on its property was clearly as well planned as any other detail; throughout winter months, the sun reaches into each wing for natural warmth, while the summer months see them shaded by the eaves. The scale of the home is modest, and the main entrance is comfortable and informal; simplicity is implied via a myriad of Japanese design elements and the use of natural materials, mostly rock and wood. Through the windows, you can glimpse a few perfect furnishings that dapple the cozy space, as well as the pool and backyard on the opposite side of the home. Typical of many mid- century modern homes, the kitchen is privately tucked away, but offers no less of a connection to the outdoors; massive windows above the sink look out to the tree-lined drive. As a pool-party visitor to the property, I mostly prowled the back yard’s pathways, zen garden, mature trees, and artist’s studio (used at the time as a gardener’s retreat). Once invited inside, however, my mind was blown by some of the home’s incredible and beautiful details. 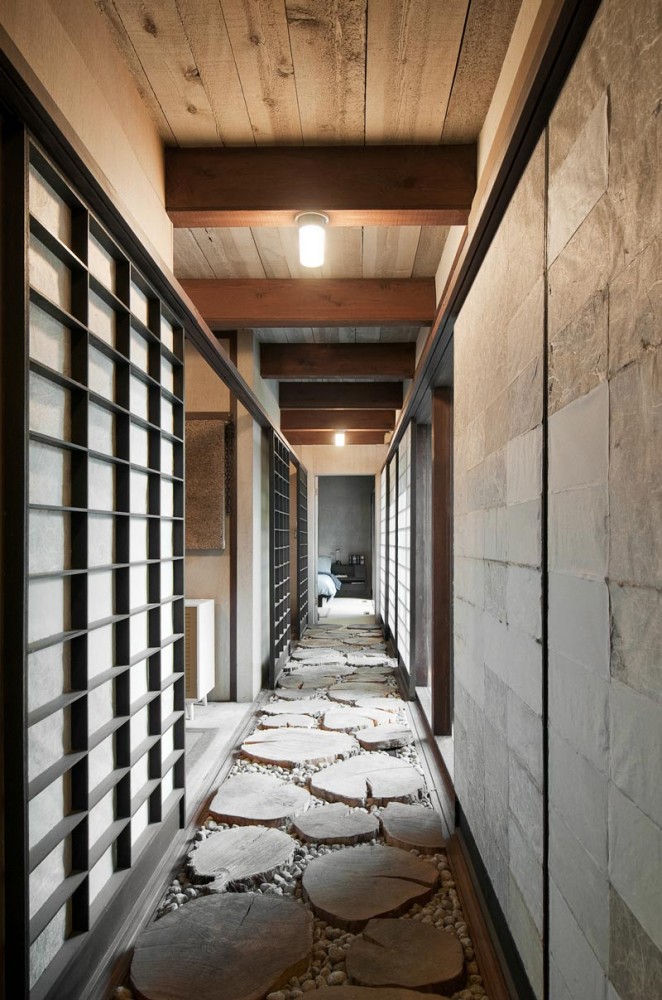 From the pool, you enter the primary living space, a sitting area anchored opposite the dining room by a fantastic, ceiling- mounted fireplace. With the sliding door open, the room puts you somewhere between luxury living space and a campfire under the stars. In another perfect nod to the style of the era, much of the flow throughout the space is created in the repetition of materials and lines. Aggregate slabs around the pool are bordered by wood, and a quiet transition is made to concrete slabs of the same size once inside. Exterior beams seen on the front of the home are mimicked in the living room and jutted over the patio space. The façade slabs with embedded rock are carried through the front door and into the sitting area, providing a back drop for artwork and a sturdy barrier between the gathering space and the living quarters.

One of the home’s most eye-catching and inviting attributes is in the hallway; it is the hallway. At the time of construction, the owners were made aware that a large tree would need to come down for the house to go up. Unwilling to let it go to waste, they opted to make use of it. Builders sliced the trunk into pieces that would be placed perfectly down the corridor of the home’s living quarters. The result is a subtle and strong piece that offers an interior/exterior balance, and further exemplifies the mid-century style. Children of the owners can recall learning precisely where to step on each round to avoid creaking on late night sneak-ins. Opposite the living-quarters area is a series of Shoji screens for needed privacy from the pool area. When open, there is clean access from the bedroom to the sauna and pool areas via a large deck. 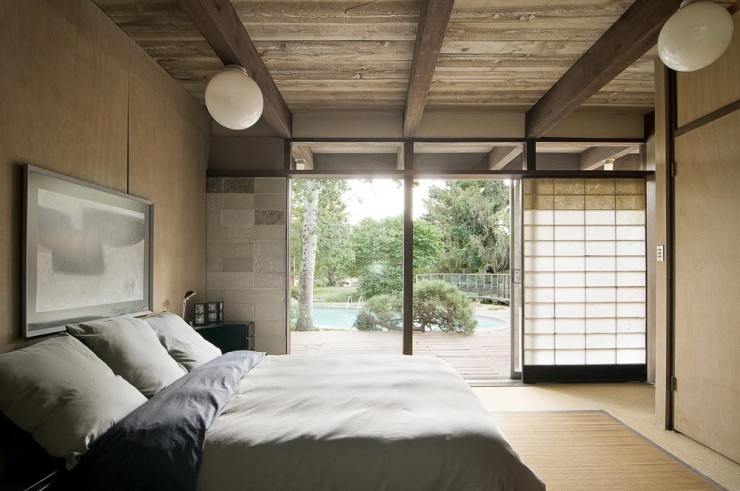 Initially, I didn’t understand the importance of where I was swimming. We pool partiers lounged heavily, heard the music, chatted, swam, ate, drank, be’d oh-so merry, and be’d oh-so still. It wasn’t our house, but we felt welcome and had a sense of belonging — a fact that I know to be a direct result of the style and design of the home. Ultimately, my experience created a fascination and appreciation for a way of living that actually makes sense. The notion that a home can so adeptly support its owner, his or her lifestyle and needs, changed my own living choices and career path. I know now that newer is not better. Polished doesn’t mean fresher, and bigger is never better than well-proportioned. I prefer natural to fabricated, and I’ll take lived-in over perfect on any god damn day of the week.