Walking into the Violin Making School of America is like taking a step back in time. It seems to have stopped here. There are no computers; in fact, there are hardly any electrical instruments at all. The air is pervaded by the odor of freshly shaved pine, it sings with the tapping knocking of chisels and hammers on wood. The students, engrossed in their work, scarcely notice the presence of an outsider and I timidly approach the nearest student to direct me to my contact.

Aubrey Alexander is in the corner, working on her own violin while advising a student on matching up a seam on two pieces of wood. Aubrey is the teaching assistant at VMSA. She graduated (with honors) from VMSA in 2011. I introduce myself and Aubrey begins to give me a brief synopsis of the school’s history.

Peter Paul Prier, who immigrated to Salt Lake City from Germany in 1960, founded the VMSA in 1972. Prier established what’s commonly recognized as the largest and most relevant violin making school in America, and his reputation as one of the most masterful luthiers in the United States is known internationally. Prier’s violins are sold globally to the world’s best classical musicians and the shop boasts a collection of rare and antique violins to rival any European collection. 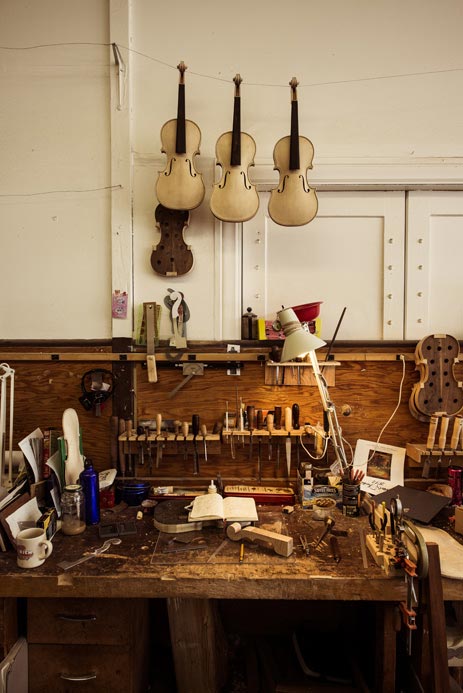 The school’s director, Charles Woolfe graduated from VMSA in 1987, worked at the Bearden Violin Shop in St. Louis until 1991 and has been the director and head instructor at the school ever since. Woolfe attributes the school’s success to its students. “Our reputation is built on the achievements of our graduates.” Woolfe says. “At the most recent Violin Society of America International Competition, 5 of the 7 gold medals awarded went to our graduates.” It’s an impressive accomplish- ment for the small, unassuming shop in downtown Salt Lake City [of all places.]

The school attracts students from all over the United States as well as interna- tionally. The program averages a three to four year completion rate, but because each student moves at a different pace, can sometimes take longer. Students take art classes, learning to draw different aspects of the violin, scrolls, f-holes, etc. They can take violin playing lessons at the school- not all students are accomplished musicians, and simply enjoy the art of making the in- struments. Throughout the course of their studies students will complete two violins “in the white”, that is, without varnish or setups, the next year they are expected to complete one more full size violin, a 3⁄4 size violin, a cello, and their final graduation violin with full varnish and setup.

Sanghoon Lee is the school’s varnish teacher. Lee came from South Korea in 1999 to attend the VMSA and has stayed in Salt Lake City ever since. “Some people expect this work to be very artistic, very romantic.” Lee says, “They come with that expectation, but actually, this is a very physical, very tiring job. Mentally you have to be able to take a lot of stress because when you work on the instrument, it doesn’t always go the wayyouwantittogo,sotheyfeelalotof failure and have to learn to overcome things like that.” Lee estimates he’s made around thirty-five violins over the course of his career. Varnishing is not a simple thing to do, according to Lee. “A lot of violin mak- ers, they still struggle with varnishing ten years later, or forever, actually. Varnishing is challenging, and a lot to learn. I teach varnishing here so I tell people I make a violin to varnish it.” He laughs.

The main goal of varnish (and just about every other aspect of violin making), according to Lee is to replicate as closely as possible the old world Italian styles of the 17th and 18th centuries. In the world of violin-making regression, not progression is the key. There is a certain sacred resonance to the sound of an antique instrument that is a finely tuned art to even attempt to repro- duce. “It’s very conservative, not creative,” he says of the process, ”only in that you have to be creative to find the old method.” Lee doesn’t believe there is one aspect of a violin above another that is key to achieving the perfect sound or look. “To make a very nice violin is very hard. There are so many things like woodworking, the art, the style. How the style affects your sound, that’s very hard. You are building a character; they’re all different.” 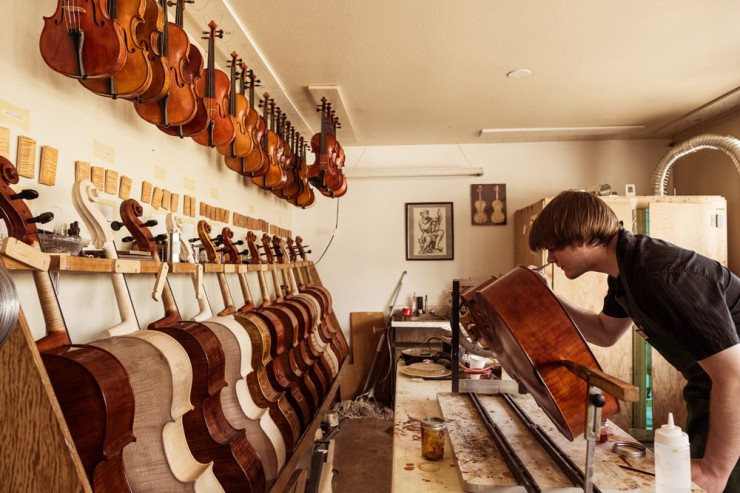 The students at VMSA are as individual and unique as the instruments they create as well. They span a wide range of ages and hail from various parts of the country and world; some are recent high school gradu- ates, while others are retired from other professions. Some, such as Paul Spencer, [who I spoke with] completed degrees and came to the VMSA post-university. Spencer is a lifelong violinist who finished his degree in Political science, “I worked in an office in New York.” He says, “It kind of helped me decide I wanted to do something different.”

The students at VMSA are quiet, meticu- lous, and consumed by their work. “I don’t have the temperament to be a professional musician,” Says Effren DeGala, 24, of his decision to attend VMSA; “I love playing, but I don’t love being in front of a crowd.” DeGala, originally from Aurora, Colorado, says he saved up for several years in order to attend VMSA. “I knew that I wanted music to be a big part of my life, and I always liked understanding how things work and what makes them do what they do and why, and I’ve always loved working with my hands so I thought this would be a good fit.” DeGala has played the cello since the age of twelve, and is finishing his third year at VMSA. I asked what one of his favorite parts of attending had been up until this point. 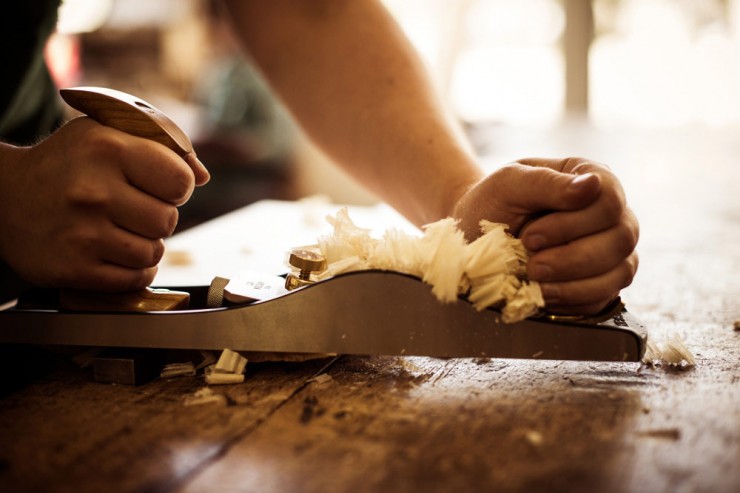 “We get to see a lot of world class instru- ments worth millions of dollars that have histories that go back decades or even a hundred years or more and that’s a really wonderful thing to be able to do even just as a musician. I don’t get to see cellos as often as I’d like but I got to see a [late16th century early 17th century luthier] De Salo cello and right now he’s sort of acknowledged as the first violin maker.”

It’s estimated about eighty of De Salo’s instruments survive worldwide. Including two cellos. “It was very small. It had a very warm, complex, sort of enveloping sound. There’s a subtlety of sound to a lot of these old instruments, especially certain makers.”

Replicating the sound and warmth of these original instruments is what they strive for at the school, “They describe a Stradivarius as being like a beam of light;” DeSalo says intently, “almost like a laser just cutting right through.” Antonio Stradivari is regarded as the master of violin making. A Stradivarius violin in today’s market value would sell anywhere from several hundred thousand to several million dollars. In 2011 Stradivari’s “Lady Blunt” violin sold for a record-breaking $15.8 million dollars to ben- efit Tsunami relief in Japan. “When played to it’s outright it’s like being in a thunder- storm, it just takes you, and shakes you.” He says, “Some of these old, old, instruments, there’s just a very subtle warmth to them- but a surprising amount of power. It’s like an ocean tide. It comes in so slowly, but all of a sudden you realize it’s everywhere.”

It is that slow patience and quiet passion that pervades here; It’s embodied every day in these students and their mentors; bearers of a centuries-old tradition that lives on, in the resonating recital halls of Salt Lake City, to the world’s most prestigious stages.