My journey exploring the validity of Salt Lake’s “comedy scene” has pressed onward. No longer am I sitting in the dank dungeon of my apartment, acerbically prodding a comic on WHAT MAKES HIM TICK. Rather, I am goading the behind- the-scenes workforce that organizes and promotes the local shows that allow such comics to reach an audience in the first place. This article focuses on not one, but three very special producers of the local BAHAHAHA talent. So hold onto your dicks; we’ve got, like, a few people to talk to. 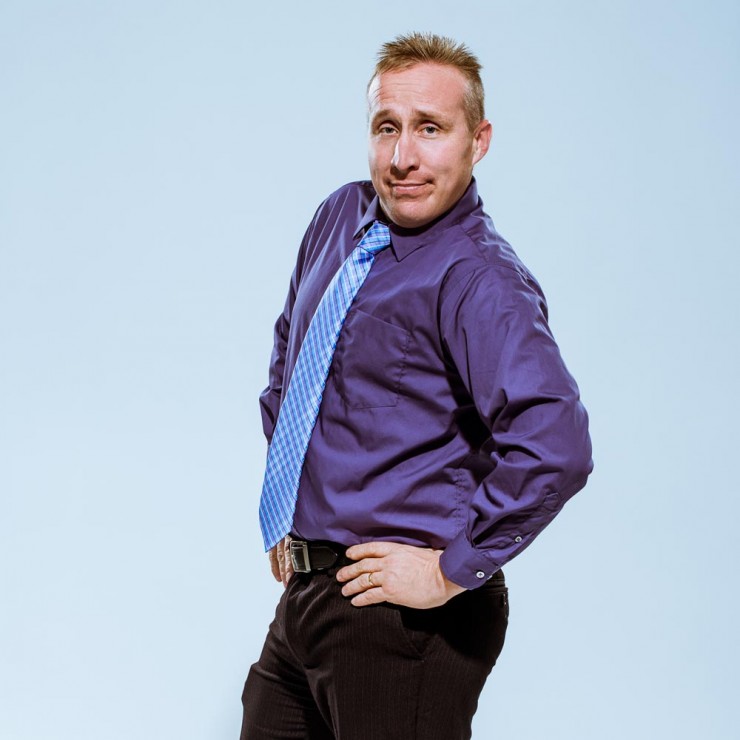 We’ll start off with Steve McInelly, because he’s by far the nicest of the three. Steve performs stand-up comedy a few times a week, and has managed to organize, market, and host the wildly popular monthly K-Town Komedy show at Club DJ’s in–you might have guessed it–Kearns. He’s like a god in Kearns. Plus, his forty year- old ass says things like, “Hipsters are just not that fucking smart,” and I just laugh, and laugh, and laugh because I don’t know what he’s talking about! Anyways, I asked him about his thoughts on the local scene, and here’s what he had to say:

“The Salt Lake comedy scene has some great local talent that work primarily in what’s considered the “underground scene”, which includes bars and house parties. Most of these comedians have a great following of fans and supporters that laugh and enjoy every minute of the uncensored format! I’ve performed in other cities, and I personally feel SLC has just as many local talented comics as anywhere else–we just need the word out there more for people to realize this scene is here and doing very well.”

If you’re wondering what all this talk about the “underground scene” denotes, Steve sums it up succinctly: “At the most popular club in Salt Lake, I got censored twice for saying ‘vagina”. I don’t like to be fucking censored.” Indeed. He continued, “Club DJ’s has been around for 25 years, and the owners have fortunately given me total control over what kind of show I can put on.” His iron-will against censorship seems to have paid off; he contends that for the past three years, no one’s stand- up comedy show has lasted and been more successful than his. Go check it out! K-Town Komedy usually falls on the third Saturday of every month. 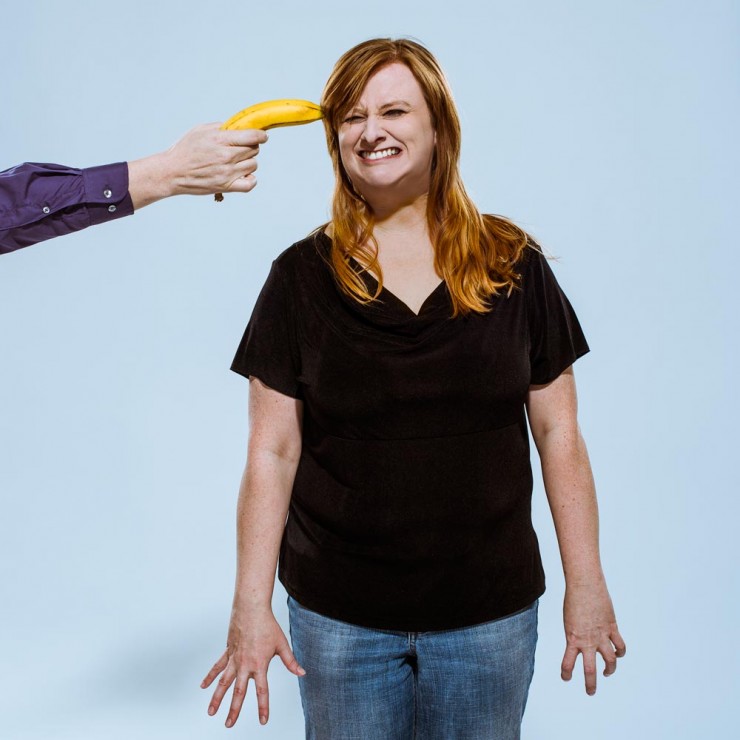 Second up is Melissa Merlot. At first, when this red-haired siren started bellowing out old tropes like, “WOMEN’S PERSPECTIVE, GIRL POWER, YADA YADA YADA,” I hardly paid any attention because I was so fixated on her enormous tits. But after a while, I mustered up a polite, “Yes, women doing things–how quaint.” Ha! No, wait, sorry, just kidding, come back. Actually, Melissa has earned every kind of respect in this town for the work she’s done with Comedy Roadkill on Tuesday nights. After Ben Fuller (we’ll get to him in a sec) entrusted her with the guardianship over the ring the weekly stand-up show that gives a multitude of comics the chance to work on their material from anywhere between five to twenty minutes (seriously, you guys have no idea how important that is), she’s settled herself into the role of a comic promoter with ease. When I asked her about the scene, she replied:

“Comedy in Utah does have a lot of freedom to it, so it is a great place for comedians to develop and learn. There are many different venues and it gives comedians the opportunity to try out all kinds of different material. They can go the comedy club route which means being more structured and clean or go the bar show route which is pretty open to anything and you can be as dirty as you want. Obviously I like to perform at the bar shows for this reason because life is too short to be clean.”

Melissa enjoys playing a major role in local comedy without having to go onstage all the time. She notes how click-y and unsupportive the stupid boys club of this town can be, but she’s consistently weathered the strange marriage of the business by promoting the ever-loving shit out of what matters: funny people. I like her! 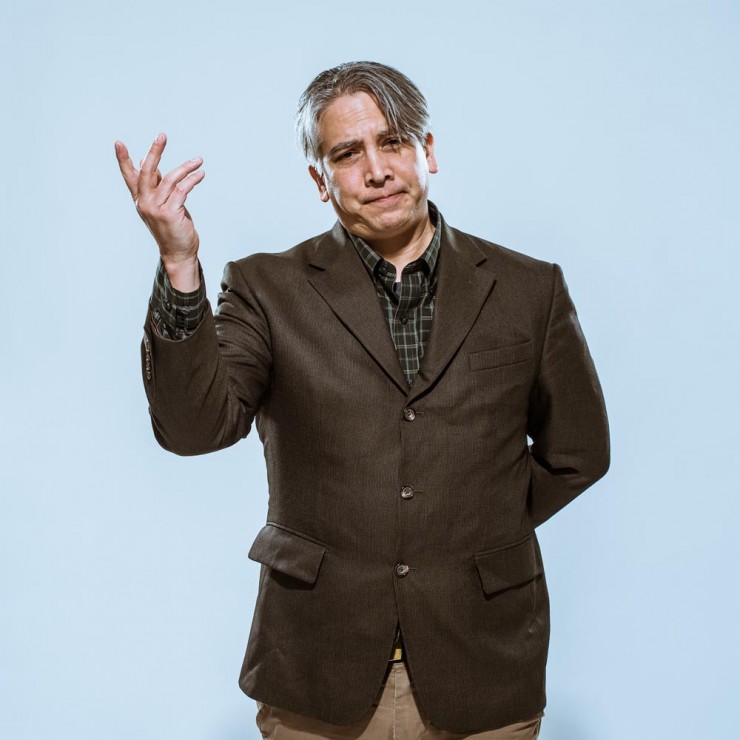 Finally, we come to the crotchety old patriarch of the alternative comedy scene himself, Mr. Ben Fuller. I don’t really think I know anyone else who is as passionate about nurturing Salt Lake talent as he is, and I’ll venture to guess it stays that way for a while. When I asked HIS opinion about stand-up in Utah, holy shit, did Ben give me an ear full. The be-blazered sage put it bluntly:

“I, personally, am disappointed in the local comedy scene in general for not being more ambitious and setting their own agenda, rather than letting it be dictated to them. We could seriously be a very cool market, but we aren’t–we have moments of brilliance (like Secret HJ Party or Hodgepodge with Blake Bard), but for the most part we’re pretty parochial. We only support what benefits us directly, forgetting that building the market and opportunity for all will benefit everyone more….was that too pompous?”

Indeed, Ben, it was. However, that doesn’t negate the fact that you’re right. Ben assembled the Comedy Roadkill show at The Complex nearly four years ago. He used to host weekly, book the showcase performers, ran the open mic, and did all the marketing on a non-existent budget. As mentioned before, he handed the reins of the Roadkill show to Melissa, but has been tirelessly working on other projects like the Gangrene Film Festival, SLC Nerd, Channel 801, and Comedy with a Complex (my favorite monthly comedy show, by the way) ever since. I didn’t have to press Ben at all to get his vital assessment of what needs to be done in this city:

“This place is a one club town right now, which is kind of sad, and I feel the only way we can move forward is to create opportunity. We could be cooler than Austin if the artists just took control. To me, it’s about the artists owning the market and supporting each other and creating opportunity for everyone. Just look at our music scene as an example of how robust the [comedy] scene should aspire to be.”

Comics come and go, but luckily we’ve got some steady, capable hands to guide local talent in the right direction. Thanks, Steve, Melissa and Ben.

But now I realize (well, after realizing this article isn’t about me so much as it is about… Read more