When I assigned myself the uncertain task of writing about the comedy duo behind the Secret Handjob Party, I went through a wide range of emotions. First I was nervous, then anxious, then wary, then apprehensive... then kind of sleepy... then worried, and then concerned. You see I don’t think Ryan Holyoak or Ryen Schlegel, the two Adonises behind the dubi- ously named comedy show that plays every couple of months at the Tower Theater, particularly like me, my writing, the shoes I wear, the suitors I choose to entertain, my Malibu Stacy collection, or my severe alcoholism. It’s like they hold me in contempt for everything I do – including beating myself up so hard just trying to be as “with it” as they seem to be every second I’m in their presence. Oh, the impact fucking hipsters have on us all.

But now I realize (well, after realizing this article isn’t about me so much as it is about them) that covering the Secret Handjob Party is something you have to do if you’re going to fully cover stand-up comedy here in Salt Lake City. These gents have earned their spot on the scene by organizing the only local show I’ve seen that fully embraces absurdist humor in all its glory. They’ve somehow managed to wrangle several of the best comics in the city to perform at these events, which is no small feat, considering their shows are meant to antagonize their audience to the point of not laughing. 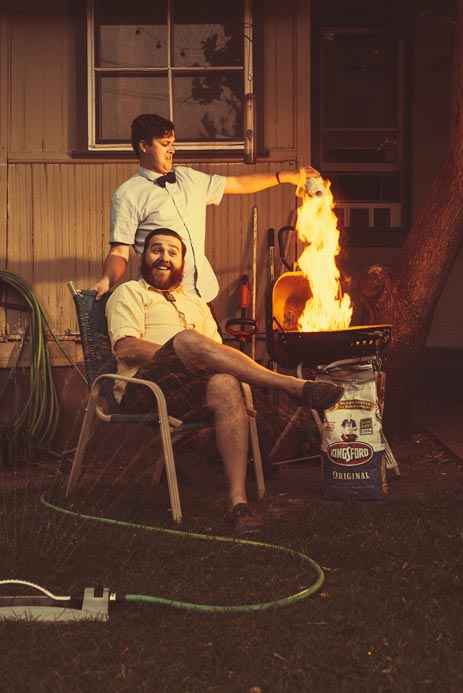 So why go, you ask? Well, for starters, the show is free and there is booze. Also, they show you movies at the beginning of their shows! Movies!!! Well, filmed sketches writ- ten and acted by the Ryans along with other comics, and edited handily by Mr. Schlegel. These films set the tone for the entire event, and every one I’ve seen has been MAGIC. Truly bizarre, gimlet-eyed magic that causes you to clutch your side while coughing out popcorn and beer mid-guffaw, but then also makes you go, “Huh” the morning after while you’re nursing a screaming hangover. After the film, they roll out local big guns like Andy Farnsworth, Levi Rounds, Natashia Mower, Tyler Ford and Dean Weber. While the comics

perform, Ryan and Ryen deliberately try to distract the audience by playing PowerPoint presentations on the screen, running up on stage to announce prizes that nobody wins, and just generally being the kind of nuisance that only someone afflicted with ADHD could genuinely appreciate.

Some of their ideas for shows may work better than others, but the bottom line is that I’ve dug myself into a happy little rut here, and I’m not about to hoist myself out of it. I like them! They put on something different, and that’s shit this city sorely needs! [Chin quivers. Cries into pillow.] Now, before we move on, let’s get something out of the way by ad- dressing the incongruous name of the show. In November 2011, the Ryans put on their first show in a friend’s warehouse. Holyoak explains “We named it Secret Handjob Party because every get-together in a warehouse seems exclusive and snobbish, and it feels like that’s where hip people go to get secret handjobs in the loft.” 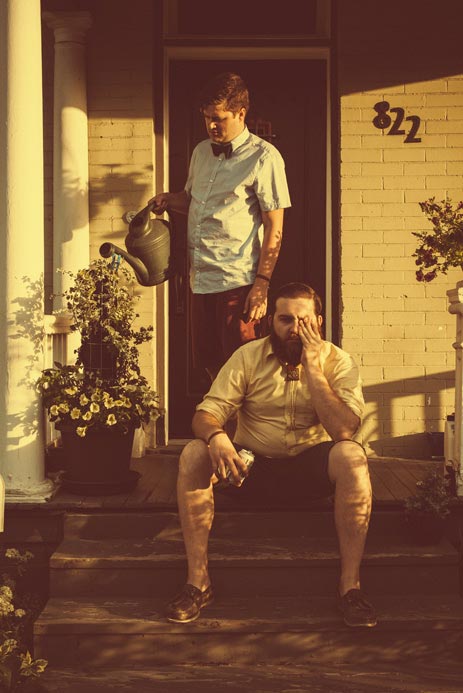 Schlegel and Holyoak have been perform- ing stand-up individually for over two years at local clubs. Both have recognizable and respectable enough names in the comedy circuit, but neither became the tour de force [I don’t know why I use these words] that they are now until they united and formed the show. This seems to be working quite well for Holyoak, who has admitted that lately, he’s only been performing stand-up during SHP or “When I feel like waking up full of shame and anxiety.” If you’re jonesing to hear Holyoak crack jokes in between handjob parties, you can find him hosting plenty of pub quizzes throughout the city these days.

When I asked Schlegel about the film- making aspect of the show, he responded, “I officially call it a ‘full-on nervous breakdown shit show’, but the industry calls it ‘video- editing’. It takes as long to film as we have between realizing it’s the week of the show and we need a movie. Sometimes the rigors of the editing process cause us to miss dead- lines.” For certain, it’s a high-stress, tortuous endeavor, but then again working in comedy generally is. To be blunt, I think these guys have a bit of work cut out for them. The Secret Handjob Party isn’t perfect by any stretch of the imagination, but I suspect these two demigods are so “with it” that by the time Judgment Day comes, they will lead us all. Until then, I’ll continue to watch their shows and chuckle to myself, “An alligator with sunglasses? Now I’ve seen everything.”

“The first time I ever went up, I got huge laughs. Then I realized all of those jokes were horrible and I hated the type of person who would laugh at it. Since then, I’ve tried to get those same people to laugh at jokes on my terms, with mixed results.”

“Comedy in Salt Lake City has allowed me to have great friends, meet and be close to great comics, and given me a good boy who is my comedy bosom buddy / life partner. We wanted to make a show where we can showcase all forms of Salt Lake Comedy and put it into a concise, mostly funny show, which would make you happy to agree to come to the next one.”

In this issue, we begin with stand-up comic Arthur Carter, a rabid soccer fan with a penchant for… Read more