Through the Smoke and Ash

Shielding myself from the blazing August sun, I sat at a small metal table on the back patio of ‘The Old Yellowstone Garage’, while enjoying a cold stein of beer with a friend. As I sipped my drink, the charred page of a book twirled in the air above my head, before finally landing on the ground ten feet from our table. “We get stuff like that blowing through here every day since the fire, man!” chuckled Bob McCarthy, the owner of The Garage.

I’d only known him for about thirty minutes, but already Bob made me feel like I was an old friend. Maybe it was the sincere tone in his voice when he spoke, or it might have been the fact that he looked at me in the eyes when responding to my questions…. or it could have been the fact that he bought me my beer. Whatever it was, it gave me the same sense of belonging that everyone seems to feel once they set foot in The Garage. That same sense of community, which seems to drip from this place, has never been more prevalent than on June 9th 2012, when they experienced a three-alarm fire. 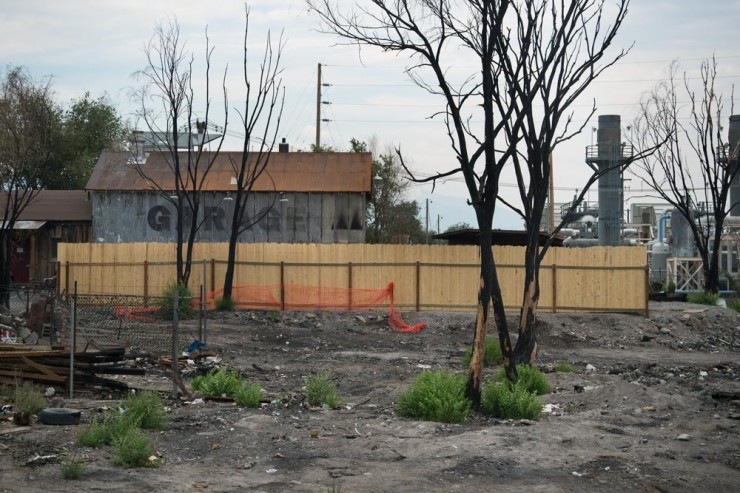 It was The Garage’s biggest weekend of t he year. Detroit’s legendary blues man, Andre Williams, was set to perform in front of capacity crowds for the entire weekend. Around 4:30 a.m. that Saturday morning, Bob stumbled through the front door of his house after, in his words, “partying like it was 1984; blackout fun and nothing less!” But an hour and a half later, the bar manager and one of his bartenders were hysterically beating on his door.

Standing in his doorway with bloodshot eyes, a hangover, and nothing more than a hat covering his otherwise naked body, Bob heard “It’s gone!” from his tear filled employees. Instead of panicking, Bob attempted to go back to bed. “I didn’t freak out or anything. I immediately flashed back to all the great moments over the past four years and thought ‘I couldn’t have asked for anything more. What a great time. And what a great night to go out on.’” However, his girlfriend Marsha refused to let the bar go without a fight.

Fire trucks and police barricades kept the couple from rushing to the still smoldering bar. Marsha began screaming at an officer to be let past the barricades.

“What are you going to do? Run up and throw your bottle of water on the thing?”

Bob jokingly said to Marsha. “She calmed down and we went for a walk up the side of the mountain to see if we could get a good look at the damage. We got a little ways up… I saw the roof, and the front and sidewalls. ‘Well, something’s still there,’ I said. So we headed back down and eventually got to the bar.”

Upon their arrival, The Fire Marshall told a shaken up Bob and Marsha, “Three, maybe five minutes later, and your bar would’ve been gone.” Fortunately, a crew working on a movie for the 48 Hour Film Project was there to call the police and get the firefighters there in time. As luck would have it, Bob had rented a suburban that weekend to chauffer Andre and his band around, making this one of the only times he’d ever left his truck at the bar overnight. His truck, along with a vehicle left by another patron, worked alongside a dumpster, shed, and fence to serve as a firebreak, miraculously preventing the fire from reaching crucial parts of the bar’s structure.

The bar had been saved, but there was still the issue of Andre’s performance scheduled for that night. Later that afternoon, a call came in from the people who ran The Gallivan Center. Almost in tears, Bob told me “They said ‘we’ll give you the venue and security for free. We spoke with Oasis Stage Werks, and they’re donating the stage and sound’”. “Backstage that night, Andrea told me ‘Bob, this town loves you. In Chicago, if you were the mayor’s son, you couldn’t get this in a day. Especially for free!’”

In a matter of hours, the community had come together and kept the party going. “I partied harder that night than I did the night before,” Bob said emphatically. “We ended up having a blast, living it up with everybody that night, man! I just knew everything was going to be okay. This bar fought and it continues to refuse to go away.”

Bob is right, and here’s why: In the 70s, the building caught fire for the first time. In the 80s, a portion of the oil refinery behind the bar caught fire, but the flames that seemed destined for the bar, were put out just in time. And through the test of this recent fire, just as it has done in the past, the building has proved why it is home to “The Hottest Bar in Town.”

While Bob’s insurance would cover the rebuilding of the bar, it wouldn’t cover the salary of his employees. “I started getting phone calls and stuff from everybody saying they wanted to help. They didn’t want to help me; they wanted to help my employees. I’m starting to tear up again,” he laughed. “There was a benefit show at the State Room and other places, that raised a ton of money. Some musicians started a PayPal account and we got donations as big as $250 each! 90% of our employees came back once we reopened.”

On July 4th, The Garage opened its doors to the public once again. The food was being served, the drinks were being poured, and the strength of its community was stronger than ever. So what makes an entire city, Salt Lake City of all places, run to the aid of a bar in this way? In a word: Bob. 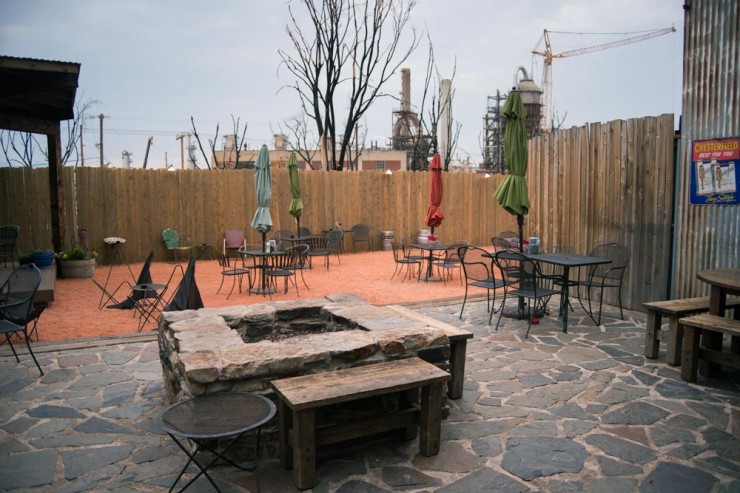 The child of two social workers, Bob McCarthy is rooted in family and community. “When it comes to The Garage…the sense of community and family…I grew up in that sort of environment. I went into business and brought that philosophy. We have a really thin line between our employees, our community, and our customers because of the relationships we have. We want to be a melting pot where everyone feels comfortable. Bars are where revolutions happen, where people meet and get jobs, where people meet their wives. We want this to be a social place where people interact, enjoy some good food, music, and each other. If you create a Shangri-La,even on the edge of town, people are going to want to be a part of it, no matter who they are. As long as that’s where the party is.”
And no party is complete without good food. Head Chef Liz Guerrero has helped craft a menu that will in no way help with your weight loss goals, but will satisfy your hunger. This CIA (Culinary Institute of America) graduate has helped launch an amazing weekend brunch, put a new spin on old Utah favorites like Fried Funeral Potatoes, and organized the kitchen to run smoother than ever.

The style of the food pairs perfectly with the bar’s music and atmosphere. Every weekend, you are guaranteed to hear the best in American music from artists that Bob and his staff handpick. “Nobody plays that I don’t like, and we take care of the bands because we like them – all of them. When you’re living out of a van, you want to feel comfortable and welcomed when you show up to play. We give drink tickets, a meal from our kitchen, and the best crowd in town. And we always pay the bands, even if it’s a down night. We just want to take care of people because that’s what we do.”

As I listened back to the recording of my interview with Bob, I started to notice something. I could hear the clanking of glasses, outbursts of laughter, and music coming through the house sound system. After hearing this, I realized to myself; Bob didn’t want to do this interview tucked away in an office somewhere. He wanted to do it on the patio of his bar, where he could still interact with his patrons. Knowing what I know now, it only seems fitting: Bob McCarthy is at his best when he’s immersed in the community that is The Garage.

If you are hitting on your bartender & decide to leave them your phone number, DO NOT TIP… Read more